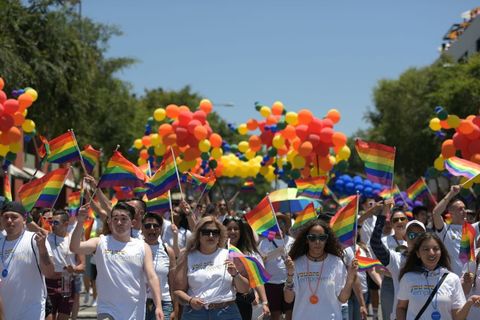 Thanks to COVID-19, Pride events all over the country and the world have been canceled and postponed, and many, including New York City’s, are going virtual. The Dyke March, which was originally reimagined as a virtual protest, turned into a Juneteenth event called “Break the Chains with Love.” On Sunday, June 28, a Queer Liberation March of several thousand protestors, speaking out against police brutality and racism, took place in New York City from Foley Square to the Stonewall Inn.

Those of us who have years of dance parties, big beach events, and picnics under our belts can go a year without them, but celebrating queer joy has and always will be part of Pride. But what about the people who were looking forward to attending their first Pride events this year, like those who have just gotten comfortable with their sexuality or gender and want to be with their chosen family?

Ananya Kumar-Banerjee, a 21-year-old from New York City, said they had one thing on their list for when they came home to New York for Pride: going to the famed LGBTQ+ West Village bar Cubbyhole for the first time. While Kumar-Banerjee and their friends are making queer playlists, watching queer TV and movies, reading queer literature, and focusing their efforts on Black Lives Matter protests, they told ELLE.com that they have very simple requests for their first, IRL Pride next year.

"Pride started from a riot. Stonewall wasn’t a party."

“Pride is a celebration of life, of our survival, and further, our continued flourishing,” they said. “I'm not sure how Pride and other large gatherings will change in the future, but at the end of the day, all I could ever really ask for is that the people I love be safe. Actually, that's not true. I'd wish for one more thing: that we could be free, that we could live without fear. That world feels very far away. But I'm hopeful. I think one day I'll see this world.”

For plenty of LGBTQ folks across the country, attending Pride events has likely never meant going to a New York queer hotspot. Megan, a 29-year-old from central Missouri, hasn't felt comfortable jumping into big Pride events in the midst of a pandemic. (She requested ELLE.com use only her first name for fear of professional retribution.) After growing up in a small town and a strict, religious household, she wanted to start gradually, and went to Mid-Missouri Pridefest two years ago. She went alone, saw a few familiar, friendly faces, and got used to being in a queer space.

Last year, she decided she was going to book herself a ticket to Clexacon, a sort of LGBTQ comic-con, or as Megan puts it, “queer nerd haven.” She walked away from the event with a few new friends, a sense of community, and even a romance.

A gay rights’ demonstration in New York City in 1980. Pride events in the city still have their focal point in the West Village, home to the Stonewall Inn and other LGBTQ hot spots.
Images PressGetty Images

“I’d never been in a space like Clexacon before,” she told ELLE.com. “I had never been presumed to be out before, and at Clexacon, everyone is just presumed to be out and queer. It’s a normal thing. It’s not quite normal in the circles that I run in here. I was still working on coming out to my family last summer, so I didn’t do any big Pride things.”

Now that she is out as queer to her family (her mom handed out hugs with Free Mom Hugs at St. Louis Pride last year), Megan was looking forward to attending some of her first official Pride events. Missouri is open after the governor lifted all coronavirus restrictions earlier this month, and St. Louis is scheduled to host its Pride in August, but she is choosing to stay home because of the pandemic.

“This year I was really looking forward to going back to Clexacon and seeing my friends again and doing big Pride things because I can only watch so many queer TV shows,” she said. But she said she's happy to sit this one out, especially in an effort to make the Black Lives Matter movement this month’s main event.

Following the deaths of Black trans people like Tony McDade, Dominique ‘Rem’mie’ Fells, and Riah Milton, the queer community has also been dedicating this Pride month to fighting for the most vulnerable in our community. But with the threat of COVID-19 still looming, attending protests still carries a risk.

"Pride is a celebration of life, of our survival, and our continued flourishing."

Chael Haywood, who lives in Austin and identifies as a non-binary trans femme, has had to stay away from the protests and any large groups because they live in close quarters with several other people who are isolating. From home, Haywood has been doing their part to remind members of the queer community that without Stonewall, a riot that was largely organized by Black, trans women, we wouldn’t live in the world we do now—where the Supreme Court finally just ruled that LGBTQ people can’t be fired for their sexuality.

“It actually works out poetically that we are having all of these protests during Pride because Pride started from a riot. Stonewall wasn’t a party,” they said.

Haywood was looking forward to being out with their queer community this Pride month, which would have been the first they celebrated. During quarantine, Haywood has been able to take the time to become more comfortable with their gender identity and femme expression, but they haven’t been able to do so in public.

“I haven’t been myself around many people yet, and I wish I could go to a Pride event and be my queer self around people, but I can’t go in a group of ten or more people,” they said.

They’ve tried to do some queer digital events, but Zoom doesn’t always make them feel the safest with their queer expression.

“Something that’s given me some dysphoria is that with Zoom it’s just my face showing and a lot of how I express queerness is through my body and how I carry myself, so I’m just sitting there with my face that has more stubble than I would like. I’m just like, ‘This is the least accurate portrayal of myself now.’”

A 2018 Pride parade marches past Stonewall, the site of the 1969 riots credited with sparking the movement for gay rights in America.
Kena BetancurGetty Images

When we talked, Haywood was trying to work out an idea for a safe event where they could be with their friends and learn some hair and makeup tutorials. One day, they said, they’ll show up looking fabulous and have the Pride they always wanted.

“I want to go to a parade or march in a parade,” they said. “So much of my queerness is tied to my activism and my political presence, so I look forward to marching not just in parades but in protests and to keep fighting for everyone. That to me is the spirit of Pride: Love for ourselves and for other people, and this acknowledgement that we all deserve to be seen and we all deserve to be treated with respect and love. If that’s not happening, then we need to take pride in ourselves and in our shared humanity and fight for that.”